The Surprising Truth About Between-the-Glass Blinds

With many homeowners pinching pennies, energy-efficient windows are a smart, simple way to conserve energy and save money now and for years to come. So it’s shocking to know that some window companies try to sell windows that offer no energy-benefits. What’s even more outrageous is that these windows are often quite expensive.

How do they get away with it? By adding in a nifty little gadget: between-the-glass blinds—and probably by not telling you the whole story about energy-efficiency.

You can’t deny the appeal of between-the-glass blinds. Homeowners are obviously interested in getting blinds out of the way of cleaning, children, and pets. And they like the slim look and apparently dust-free nature of the blinds…

Throw Energy-Efficiency out the Window

Why do between-the-glass blinds perform so poorly when it comes to energy efficiency? To answer that, we need to know why modern windows are energy-efficient, and the answer is between the glass.

Glass by itself is a poor insulator. After all, that’s why folks make cookware out of glass. However, double-paned windows created a revolution in the window marketplace.

With double-paned windows, the two pieces of glass seal a layer of air between them. This sealed layer of air provides most of the insulation in a double-paned window.
If the space isn’t completely sealed, or if the width of the space isn’t right, heat will transfer into your home through convection and conduction. How does this affect you? Heat gets inside of your home in the summer and your warm air travels outside in the winter.

Windows with between-the-glass blinds do not have a sealed layer of air. Surprised? The blinds stop the heat from passing through the window, but the heat gets trapped between the glass. Trapped heat is a problem. It either expands the air inside the glass and breaks the seal—causing foggy windows—or it warps the glass—causing windows to operate poorly and look bad.

To maintain the window’s expensive good looks and operation, holes are cut in the frame to vent the air. Heat problem solved. Energy savings… cancelled.

The vent holes prevent you from having the insulated benefit of a layer of air. So basically you have a single-paned window with an extra piece of glass—similar to the storm window technology of the 1930s.

And double-paned windows have even better energy savings when filled with argon gas. Argon, a heavy, invisible, non-toxic gas is a much better insulator than air. Windows with between-the-glass blinds aren’t sealed units, so they can’t be filled with argon.

In an effort to make windows with blinds between the glass more energy-efficient, some window companies have turned them into triple-paned windows. You have three pieces of glass with two spaces in between. One space holds the between-the-glass blinds. The other space has Low-E coatings and argon-fills. While triple-paned windows with blinds between the glass may be more energy efficient, that extra piece of glass makes the windows bulkier and much more expensive.

That’s because glass is heavy. To support three pieces of glass, you need a bigger window frame. Bigger window frames cover up the glass. And less glass means less view. You want windows that let in light, right? Windows that offer a clear, beautiful view. You don’t want to stare at big, bulky window frames, and triple-paned windows are significantly more expensive. You’re basically paying for two windows. One with modern, energy-efficient technology. And one with between-the-glass blinds.

Or you could save a lot of money and get equal or better energy performance from energy-efficient, double-paned windows with Low-E coatings and argon gas-fills.

There’s another side effect of those holes that vent air and heat: dust. Yes, between-the-glass blinds do gather dust. That’s because the dust drifts through those holes, or sneaks in through other parts of the window, and gathers on the blinds.

In fact, one of the largest makers of between-the-glass blinds devotes a large section in their manual to helping you remove the glass and clean the dust off the blinds. That’s right–you have to take apart the window to clean it! If anything, blinds between the glass are more difficult to dust than regular blinds.

Don’t Sacrifice Energy Savings for Style—You Can Have Both!

With the price of energy rising and summer’s heat only getting hotter, energy-efficient windows are more important than ever. Because windows with between-the-glass blinds are basically 1930s technology, they won’t save you much money on heating and cooling.

On the other hand independent testing proves FIBREX windows from Mr. Rogers Windows can cut your energy bills by 25% or more. All Mr. Rogers Windows come standard with double-panes, argon-fill, and easy-to-clean Low-E4 coatings. The savings are significant.

And, if you really want blinds that are slim and out of the way, look into snap-in mini blinds. These blinds snap right into the frame. They’re sleek, convenient, easy to dust, and attractive. Plus, you still get all the energy saving benefits of a modern window.

What you can read next

FORE! How to Protect Your Home’s Windows from Stray Golf Balls

Find the Right Curtains for Your Home 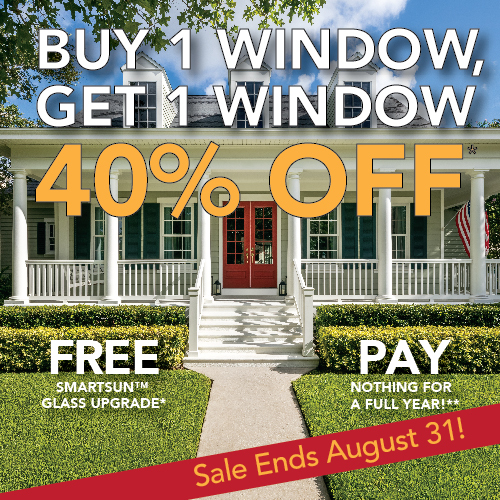