Thinking Green? Solar Vs. Wind Energy for Your Home

At Mr. Rogers, we make it a priority to offer products from manufacturers like Renewal by Andersen® that do their part to take care of the environment. If you’ve been thinking about taking the next step towards green living and are considering sustainable energy options for your home, that’s great! But you should consider your options and weigh the advantages and disadvantages of owning a home that runs on solar or wind energy. Much of this decision can come easily depending on where you live. Wind patterns, land elevation, and local government regulations will all influence which option is more suitable for you.

For the typical homeowner with an average sized residence, investing in wind energy can be a little risky. You’ll need to be in area that has room for small wind turbines that gets smooth airflow and above-average wind patterns, meaning you’ll probably need to be able to mount them up high. This means that if you live near a busy road or lots of trees, a wind turbine probably isn’t a good option. However, if you live in a coastal area in an exposed area, wind energy could be a great option. If you’re seriously considering wind as your primary power source, you should get a proper site survey to ensure you’re making a sound investment. This will measure wind speeds around your home to make sure there’s enough wind for turbines to be a viable option.

For people that live in cities and suburban areas, solar power is usually the sustainable energy of choice for most individuals. Like wind power, solar power is silent in operation, but it requires much less space and is less conspicuous. Solar panels can be mounted to your roof without losing efficiency, just as long as there isn’t anything blocking the sun. Unless you have a lot of wide open space and lots of wind, solar energy will likely be the better value to you.

Furthermore, installing wind turbines usually requires approval from local government since there is potential to disturb your surrounding neighbors and businesses. Solar power might require approval as well, but you won’t need to jump through nearly as many hoops to get started. Solar panels are quick to install, have minimal cabling, and require little maintenance, making them much less of a hassle overall.

Solar radiance is also much easier to predict on an ongoing basis than wind patterns are, so you’ll get a more conclusive prediction about the amount of energy you’ll typically receive from solar energy. This is another reason why lots of individuals opt for solar energy, especially if they live in residential areas or cities. At the end of the day, the choice often comes down to your home’s physical location.

If you’re thinking of ways to make your home greener, you can take some smaller steps towards being more eco-friendly by ensuring your home has energy efficient windows and doors. If you’re thinking about replacing your existing windows or exterior doors, we’d love to talk to you about what Mr. Rogers can bring to the table. Click here to contact us and we’ll be in touch with you shortly.

What you can read next

Green Remodeling Ideas for Your Home 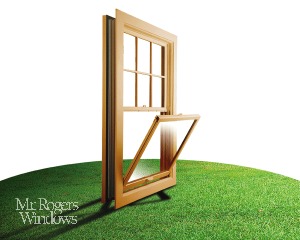